As I eluded to in my previous Sushizanmai post, I somehow ended up back at the market, at ungodly hours yet again, despite mine having already seen the tuna auction.

I apparently can be very easily peer pressured into joining group activities. #FOMO

I was out with a group on people that had a destination of the tuna auction at some point in the night. However, they were going to go party in Ginza before making their way down there. One of the hostel employees, a local, said that she would show us around that part of town as that was where she lived. So, ya, I wasn’t about to pass up on seeing how the locals partied (from what I gathered in previous nights, hard would be how).

However, the employee never got in touch with us via the social medias like she was supposed to. And Ginza was completely dead at the wee hours of the night.So I was out in Ginza and there was no party to be had, and one might ask “why didn’t you just go home Kelly?”. Well, that would be because I am a cheap mofo. The subway was no longer running and a cab would’ve costed like 50 bones. And Tokyo was another one of those cray cray cities where an Uber costed MORE than a cab (#wut).

I wasn’t about to spend $50 on a taxi when I could spend that on noms.

So I stayed out. They did a Lawsons beer crawl. That’s where you buy a can of beer at every Lawsons that you pass. That did not last long. There are a hell of a lot of Lawsons in Tokyo.

We got to the market. I showed them where they needed to line up for those sweet neon vests and I peaced out to find myself some Sushi Dai. I figured, since I was here this early I might as well go get myself a spot before that massive line inevitably forms. Lemons = lemonade.

On my walk to Sushi Dai, one of the vendors in those sweet motorized mini trucks offered me a lift. #TokyoDriftIRL 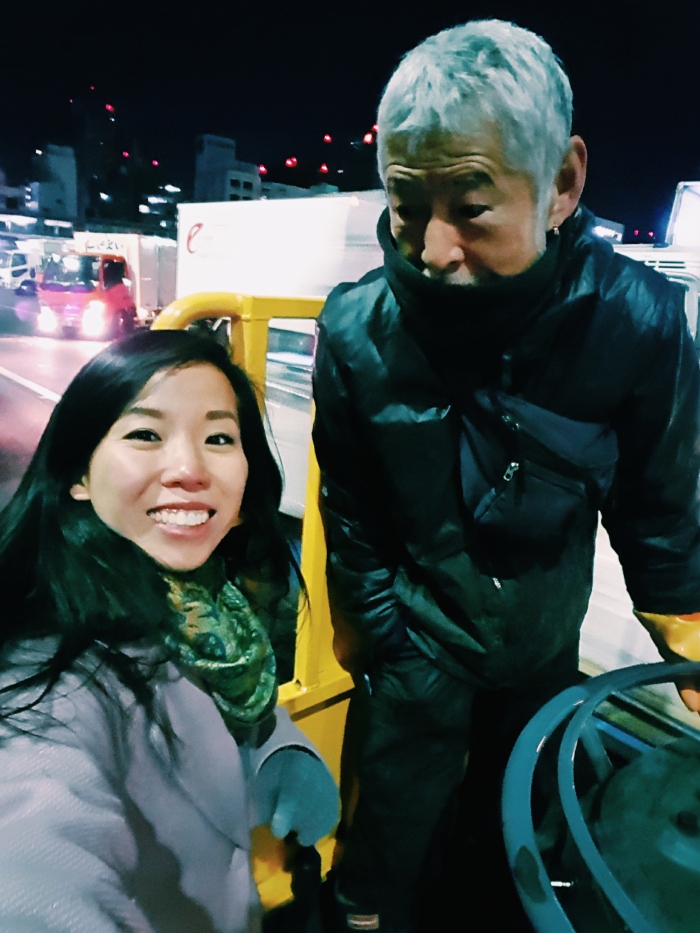 I think I arrived at the restaurant at like 2:30a (they open at 5a) and THERE WERE ALREADY PEOPLE IN LINE. Locals, one older gentlemen that was first and then a younger lady that was waiting in line for her and her younger sister who was waiting in the car (um…best sister ever?!?).

Standing in line at 2:30a for the promise of food in 2.5 hours made me wish for three things:

#1 – I wish I had wore more than one thin layer of socks. Almost broke down and bought #touristtrap socks from the vendor setting up across the way. Japan in January is cold af.

#2 – I wish my Japanese was better so I could’ve chitchatted with the people in line. I totally had a (pitiful) conversation with the lady in front of me using the translator on her phone.

#3 – I wish they would’ve let us wait inside in the warmth. I would’ve promised them my first born that I wouldn’t make a sound or move.

(Me, peering creepily inside, trying to will them to come let us wait inside)

So happy that I was able to listen to my podcasts during those 2.5 hours. It was real boring waiting in the cold in the dark of the night. I did some super not-dorky squats and wiggling to keep warm. So you might also be wondering “WHY THE HELL ARE YOU WAITING IN LINE FOR A RESTAURANT THAT’S NOT EVEN OPEN YET, KELLY? ARE YOU CRAY CRAY?”. The answer is no. I’m not cray. This restaurant is notorious for having 30, 40 people lined up outside once 5a hits. And they can only sit 12 people at a time. And the average eating time of their omakase is 45 minutes. So, you do the math. I would’ve had to wait regardless. And my FOMO brought me to the market at 2:30a, so why the hell not?

Anyways, the food. 5a came and a sweet old lady let the first 12 people into the tiny sushi bar restaurant (YAAAASSSS). You can choose between two set menus or order a la carte. For ¥4,000 (approx. CAD $50) you get the “trust the chef” course, which is essentially an omakase where the chef will select the best choices of the day for you. You get 9 (chef’s choice) + 1 (your choice) pieces of nigiri + sushi roll + rolled egg + miso soup. For a little less (¥2,600 or approx. CAD $30), you get the jyou (standard) menu of 7 pieces of nigiri + sushi roll + rolled egg + miso soup. From a purely numbers stand point, you’re paying an extra $20 for 3 more pieces of nigiri. But I’m not sure if you would get even remotely the same items on the jyou set.

I got the omakase plus some. Cos I’m a big fan of what the hell. Go big or go home right? It’s good to note that Sushi Dai is cash only. I almost didn’t leave enough dough for myself to take the subway home. Food before everything else.

The meal came with complimentary green tea. AS MUCH AS YOU WANT. It was such a welcoming sight after almost freezing my toes off in the cold.

My sushi breakfast kicked off with the rolled egg. This was a little different than most of the tomago I’ve had. It was served warm and first. Which is completely opposite (cold and last) than most of my experiences. Eggy goodness: 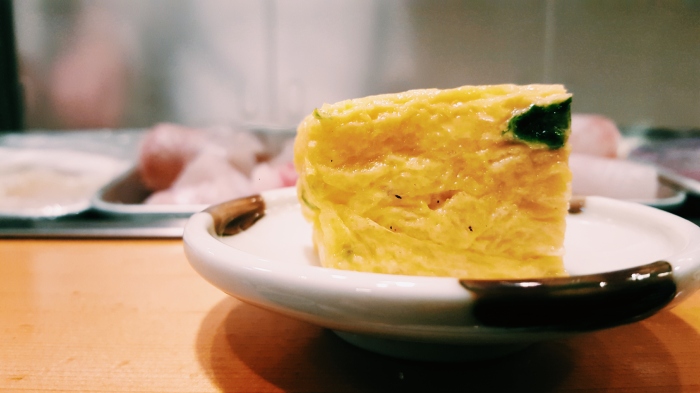 And your obligatory miso soup:

Then it was the nigiri’s time to shine. This is one of those restaurants where the sushi chef puts the right amount of wasabi onto the sushi for you and tells you when to use soy sauce. You listen to them because they know what works best to bring out the right flavours for that particular type of fish.

My chef was Chef Yuuki. He was very nice and kind and chatted with me through out the meal. 😍😍😍 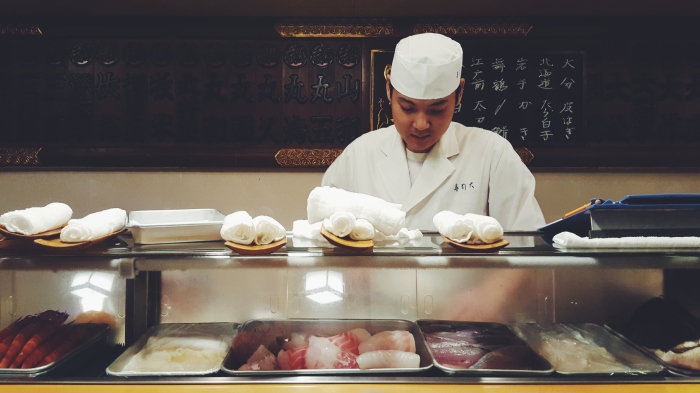 So fatty. Much silky. 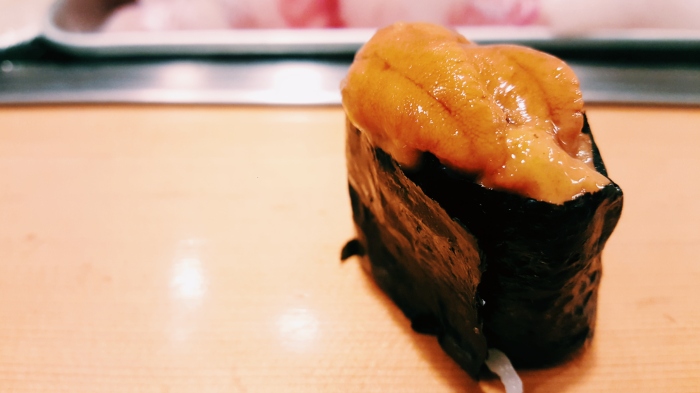 (This was so fresh it was still moving!)

Two mysterious fish that I apparently forgot to write down: 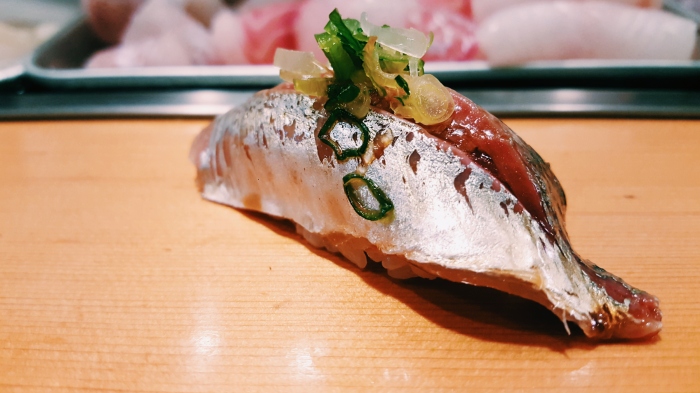 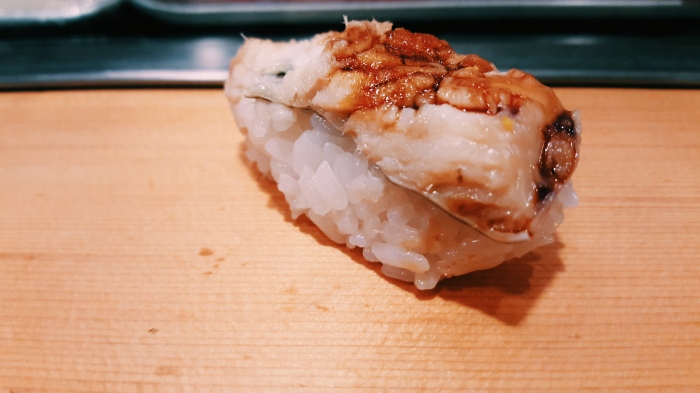 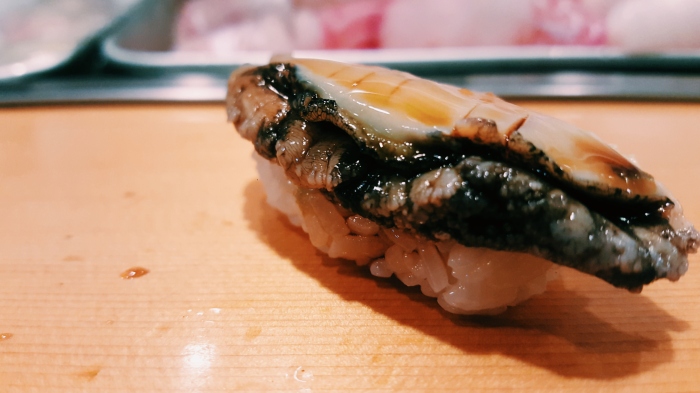 And because my stomach is bigger than my wallet, I added on a couple of extras. What, they were seasonal! 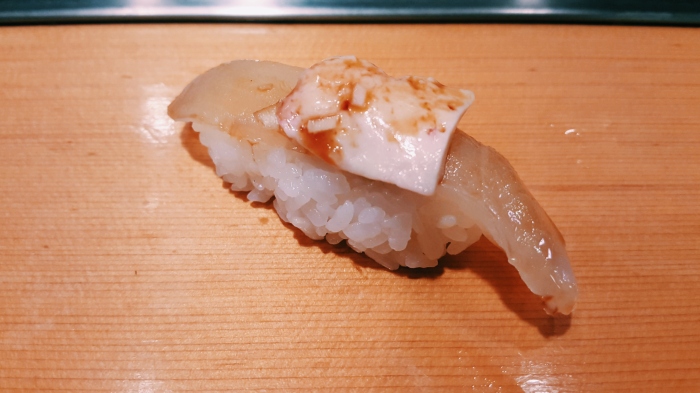 There is a reason why this place has a line out the door on the daily. The fish is so good and the sushi is prepared with such care. I think the fact that locals are willing to line up for this place speaks a lot about how amazing it is.

Also, some fun tidbits: the older man that was first in line had his own special menu. It seems like that he was quite the regular. Then there was a couple to my left that downed 4 bottles of sake at 5a. SO HARDCORE.

Verdict: It was delicious. But I’m not sure if I’d wait that long again for it. Especially in the cold. Though I’m not mad at all the events in the prior evening that lead me here. I promptly left the restaurant, hopped on a subway, and crawled into my cubby hole bed for a mega 7a sleep.