We left Sydney quite early on the 7th as we wanted to squeeze in the Blue Mountains (since we missed it because of Mr. Weather) 😒.

We drove to the Blue Mountains and made our #dailypastrystop at Bilpin Fruit Bowl for some scones (somewhat important), apple pie (important recurring character), and coffee (most important).

We (T.) drove up and down Bells Line of Road a bajillion times cos we were looking for the Claustral Canyon (something I came across like 3 years ago and wanted to go to), which I obvi just saw, screenshotted, and didn’t investigate too much into. Turns out, you need all sorts of gear and stuff, which we obviously didn’t have. Whoooops. Next time.

We just ended up coming on a short little trek here:

and went on our merry way. We then drove on to Terrigal, through The Entrance towards Lake Macquarie. We had planned to stop in Newcastle and Nobbys Beach, but the Blue Mountains shenanigans ate up quite some time (whoooops). So we were going to drive straight to Nelson Bay/ Port Stephens, settle in to our accoms and just have a chill night. But then, we saw this Samurai Nudist Beach pop up on Gmaps while navigating, and 🤔. We hadn’t had our #dailybeachstop or eaten our pie yet, so we thought:

💡 WE MUST EAT OUR PIE ON A NUDIST BEACH 💡

Because, that’s a thing people do right?

So, we track it down. The way Gmaps showed us (fail, Gmaps, fail) took us through this sandy, rocky track littered with red ants and angry, pokey rocks. We finally saw the sign:

But still had to traverse those big rocks to get to the actual beach. By the time we hit beach sand, we had trekked for like 30 minutes (pie in hand), so we said “fuck it”, plopped ourselves down and got into our birthday suits for some nude-beaching.

Literally within 10 minutes of being in the water, we noticed a guy in a truck hanging out like 2 metres from where we had planted our towels (and our pie 😱), so we just kept hanging out in the ocean thinking we could wait him out. Then a girl came out to us with like 10 kids in tow to ask us if we knew him. Unbeknown to us, we apparently were on the unsavoury side of the beach where creepy drunks like to come harass unsuspecting people (Like this dude was legit just drunkingly gawking at us, not even stealthy). So her army of children went and got us our towels (so cute) and her and her uncle and her entourage of baby nudists walked us to the other end (the north end) of the beach where all the nice people go.

Despite that unpleasant creep, we ended up having a great time chatting with some nudists, eating some nude beach pie, watching a beautiful nude sunset, and getting a nude ride (not really) back to our car (does that count as my first ever hitch-hiking?). 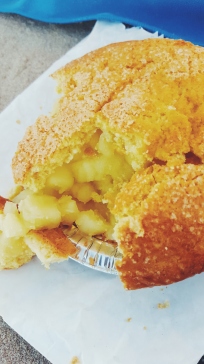 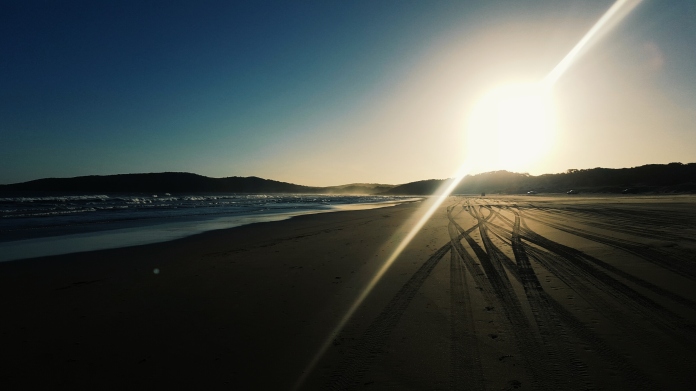 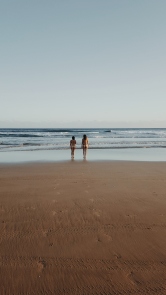 Afterwards, we made our way to our Airbnb, this gorgeous thing. It was this cute little granny flat (I think I’m using that word properly) and would recommend. Dropped our bags off, got confused cos they wanted us to park on their grass 😱, and went into Nelson Bay for some late night Thai noms.

This was definitely our most adventurous day, by far.

We went back down to Nelson Bay in the morning to check it out not in pitch black then went off towards Coffs Harbour.

We stopped in Andy’s Cherry Pie Cafe cos, you guessed it, #dailypastrybreak. But also cos T. wanted more brekkie. One of the best pit stops, cos there was great eye-candy (the most gorgeous man came in with his equally gorgeous wife and kids – recurring characters).

We then made our way to the Koala Hospital, the world’s first hospital dedicated solely to the care and preservation of koalas.

I, of course, tracked down the fattest one:

Pie stop at Fredo Pies, and because some weirdo guys next to us was having some weirdo conversation about asexual carrots, it reminded me that I have not been having enough veggies on this trip. So I bought a zuchinni from a nearby organic shop. Because, that’s a thing people do right?

We then made our way to South West Rocks for some views:

Arrived to Coffs Harbour, dropped our bag off at the YHA Hostel (would not recommend, they showed us to our room and hadn’t even done the sheets, it was like someone was napping in there. Gross.) Walked around town, they had some fun park, carnival thing happening, where we clocked the handsome dad again (wiiiin). We walked to the marina and then headed to the beach for our #dailybeachstop. We had Indian for dinner at Touch of North India (yum), where we, you guessed it, clocked the handsome dad again.

This was definitely our most eye-candyest day, by far.

We left the hostel as soon as we woke up, cos it was yucky. We drove through Yuraygir National Park for some of dem famous jacaranda trees and stopped at Yamba for some lunch.

I introduced T. to her first Golden Gaytime:

We definitely got way less ambitious towards the end of our trip. In the itinerary I planned out, we had planned to do a bunch of inland detours (i.e., Lismore, Kyogle, McPherson Ranges), whiiiich we totally skipped. We were very underwhelmed by the “mountains” in Oz and had more rain than desired so we decided that we were just going to maximise beach time!!

We spent the rest of the day in Ballina, hung out at the beach, eating pastries. #whenfattiestravel 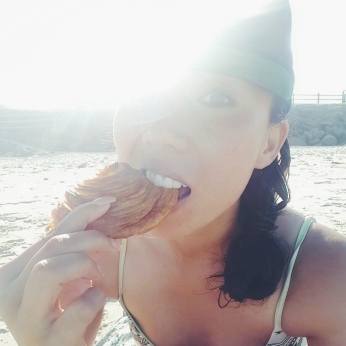 Drove into Byron Bay, dropped our bags and car off at Glen Villa Resort (not as fancy as it sounds). Less of a resort, and more of a Caravan Park and Camping Ground. Or as T. called it, a trailer park. It was fine doe. Did the trick.

For dinner, T. wanted sushi so a quick Google (failed us again Google) led us to O Sushi. Guys, let me tell you, the sushi there was A W F U L. Do. Not. Recommend. It was probably one of my worst sushi experiences ever. The giveaway: bad rice. Their rice was on par with the vinegar-y shitty rice I once had at the old Sushi Tokyo in Calgary. It was extra bad too cos we were so hungry that we just started pulled plates of food off the belt right away, and by the time our beers arrived, I was definitely over it. I somehow managed to convince T. that it was a lost cause and that we shouldn’t sink any more of our resources (money AND stomach space) into this place (sunk cost, yo!). Paid our bill (not cheap) and went for a second dinner at Asia Joe’s (so much better) (but also not cheap).

Wandered the main strip for a bit to take in the sights and sounds of drunken backpackers and called it a night at a reasonable hour 👵.

Had brekkie on the porch of our sweet, sweet trailer: 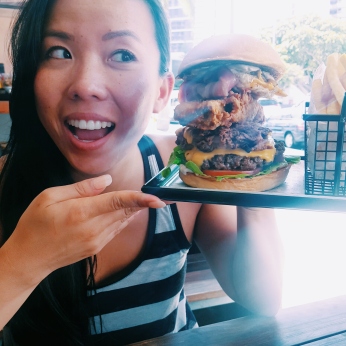 Chilled at the beach for a bit then headed up to Brissy. 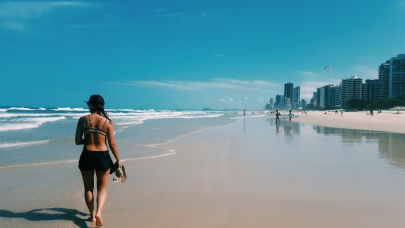 We reallly wanted to check out Lone Pine Koala Sanctuary but unfortunately didn’t make it in time (check the trading hours kiddos). Soooo we ended up just going to clean our rental car out (yay, #adulting) and made our way to our hotel for the night. We stayed at the Four Points Sheraton, a little #treatyoself to end the roadtrip.

We wandered by the river for the eve, and had some yummy seafood to celebrate the last leg of our EPIC AUSTRALIA ROADTRIP. 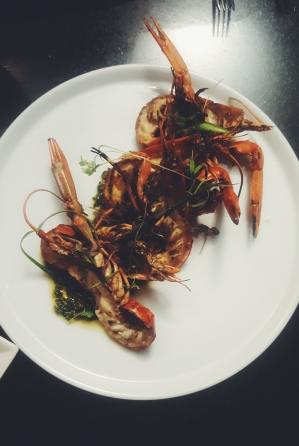 Last of the roadtrip, but not last of T.’s time in Australia. Stay tuned.

Sydney to Brisbane Summary: 4 days, 1400+ km fuelled by a nudist fam jam, a handsome dad, and more absurd amount of pastries and Adele. Thanks T. for navigating the insanity that is narrow winding Brissy rudes.