Finest travel moment to date: waiting in line to buy an Opal card at the Sydney airport train station. Squats (#properform) down to pick up something with my backpack on, falls on my ass, and couldn’t get back up. Struggle was reaaaal. Felt like a flipped over turtle on it’s shell. Apologies to the 3 people that had to witness my embarassing antics. I’m graceful like that.

Sydney is like the city where ex-EYers go to forget about EY or something. Meet up with three of my old co-workers. The resignation seems much more solidified for some reason after this leg. #goodbyeforeveruncleernie

As I’m coming back in February with some of the girls from back home, didn’t feel like I had to be too touristy this go around. Stayed at a friend’s in Bondi, spent the better part of the first 2 days trying to sort out some of the future legs of travel (yaaaay booking hostels and flights) and bumming around Bondi Beach. Tanlines are getting well on their way.

Met up with Ricarda who landed in Sydney the day before. Stumbled down into Tatler Sydney because we heard live music being played from the streets. Had delicious drinks made from an adorable bartender with a zero-creepvibe ‘stache.

Closest touristy thing I did was to have drinks at the Opera Bar and got…relatively close…to the Opera House:

A random drunk lady said I looked like Lucy Liu. So obviously my new favourite place in Sydney (on a side note: this way, hearing third-hand through friends by a random lady in a nice bar in Sydney, is a solid zero on the Lucy Liu comparision creep scale. Being accosted by a random dude in a park in Barcelona while minding my own business with headphones in is a hard 8. And even though she’s probably the only well known Asian Hollywood actress around, I’ll still take all comparisons lower than 5 on the creep scale). Went to a late night dumpling joint for noms afterwards. If there was a classy dim sum bar in Calgary, it’d never get rid of me. Dim sum is like the perfect drunk food: small bite size meat packages that can be overconsumed without the greasy feels associated with most other late night foods.

Went to see Deano, my fave bald Brit, sing at the Kirribilli Market. So amaze. Also, wandering around the market made me happy(?) that I have limited room in my pack. There were many cute impulsive buys if I had the space for it. My pack is already gaining mysterious kgs even without me putting in new stuff.

Got dolled up and went to the races. Bet on horses exactly like how I pick wine: carefully chosen based on merit, on experts’ recommendation, on my affinity to their name and “look”. Much scientific. Should come as no surprise that I did not come out ahead.

Unless overconsumption of champagne is a thing. Then I totes came out ahead. Day of much fun in the sunshine with great people!

Spent my first last day in Sydney having a BBQ “barbie” at Bronte Beach.

Rookie travel mistake: boarding the plane in the same thing I went to the beach in. Denim overshirt, shorts, bikini, flip flops “thongs” (a style I’d like to coin as “beach cowboy airport chic”) and froze my ass off on the plane. Ain’t nobody want to purchase a blanket for $10 Jetstar. Now a $2 rental I would’ve gone for. Rethink your onboard purchase model please.

Rookie life mistake: not eating at a barbeque and then buying a not very filling salad at the airport (to be “healthy”) and then proceeding to buy cup noodle on the plane (not healthy, but so full of msg deliciousness. Instant Noodle is kind of like cocaine. You know its probably going to kill you someday but oh so enticing).

Whole row on the plane for myself = napping hard. 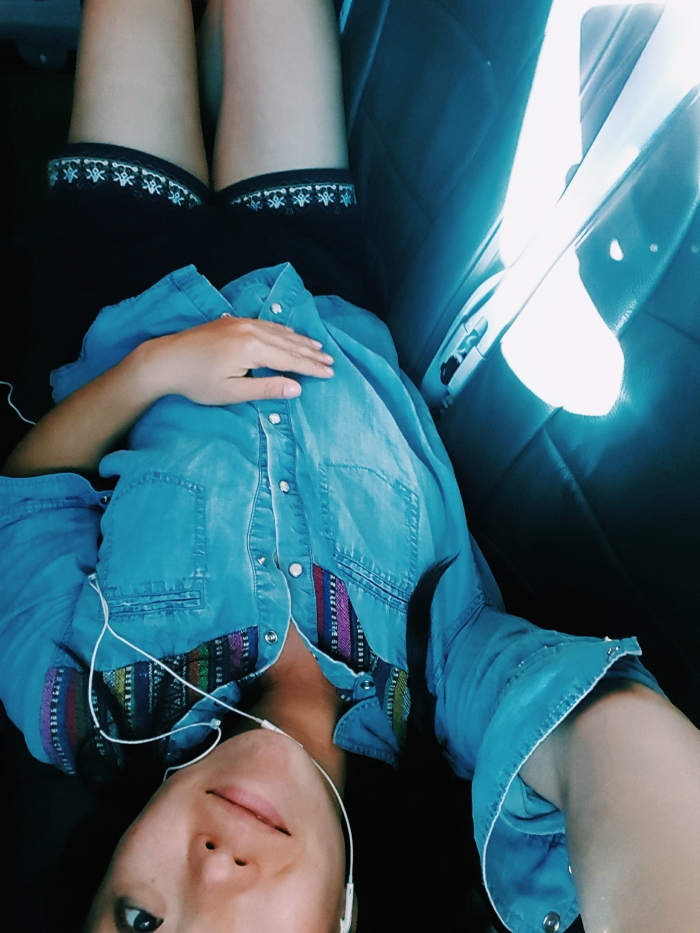