After waking up from crushing my ushe Tokyo afternoon nap, which was much necessary after our late night/early morning at Tsukiji and sushi breakfast at Sushizanmai, I obviously needed to re-nourish my very empty, very grumbly stomach.

A told me about this cheap Japanese chain that served budget friendly gyudon that was literally half a block from our hostel. Sooooo, it was pretty much the perfect post-nap noms.

Matsuya is a Japanese chain restaurant that was established in 1966 that serves inexpensive donburis. Donburi literally just translates to “bowl”, so this is a restaurant that serves bowls full of rice topped with stuff. I’m pretty sure Matsuya is famous for their beef bowls. There’s a “Premium” Gyumeshi and a regular gyumeshi – but I’m not sure what the difference is, one is to assume that it is a better grade of beef. But nevertheness, you get a bowl of hearty rice topped with beef for a mere ¥380. So under five bones, you’ve got yourself a meal (it’s not all expensive eating in Tokyo, although expensive eating in Tokyo aplenty).

I splurged a little and got the set with spicy sauce, green onions, and an egg for a whopping ¥480. I need dat protein, yo. And greens, it’s so hard to get veg in Japanese meals that green onion counts when you can get it.

Also raw egg yolk on anything is just delish. #datyolkdoe

If you don’t like egg yolk, we can’t be friends.

This is what the store front looks like if you want to give your wallet a breather and have a cheap meal in Japan: 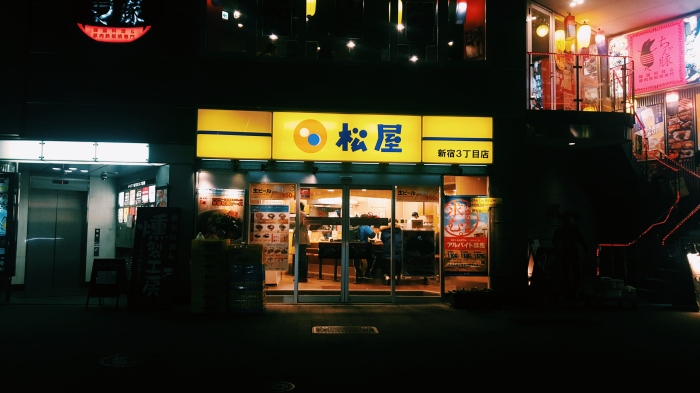 P.P.S. They also sell big bottles of Asahi for ¥430 if you wanna get yer drank on.